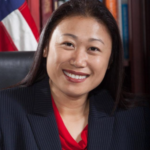 Let’s go ahead and get one thing out of the way — we don’t expect every single member of the California Legislature to be a progressive. But we think it’s fair to expect legislators to actually reflect the values of their districts. Sen. Janet Nguyen hails from a moderately progressive district. Since 2012, her Orange County district has voted progressively on statewide ballot measures more than half the time.

How, then, does Sen. Nguyen represent her constituents in Sacramento? Poorly. She earned a Courage Score of 3, voting with corporate lobbyists and against nearly every critical piece of progressive legislation in the Senate.

Let’s start by taking a look at Nguyen’s district. Voters went to the ballot box in 2016 and said Yes, time and again, to progressive causes. Strong majorities voted to tax the wealthy to fund education and health care (61.9% on Prop 55), a tobacco tax to fund research (62.8% on Prop 56), reforming California’s parole and juvenile trial system (61.5% on Prop 56) and to reduce gun violence (63.5% on Prop 63).

This is a new Orange County, with moderate voters and more diverse demographics. Why, then, does Janet Nguyen cast vote after vote in favor of draconian, inhumane policies that favor the rich and powerful at the expense of everyday Californians?

It’s clear that when Nguyen gets what she wants, her constituents lose.

Nguyen voted to allow overzealous prosecutors to pursue convictions against children under 12 (SB439), against greater transparency for law enforcement by mandating local agencies make public their most current training materials (SB345), and against needless sentence lengthening tack ons when an offender has a prior conviction, a practice which disproportionately impacts low-income communities (SB180) — Draconian Law Enforcement Practices 3, Sensible Progressive Change 0.

All told, Nguyen votes against progressive priorities every chance she gets, despite her district’s clear progressive values. Maybe we can help her see the reality of Orange County in 2018 and and start doing her job?